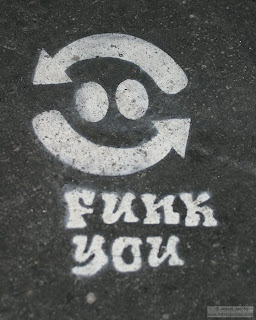 During my junior year of college I lived with Dave Burck in a god awful apartment. One night the two of us were smoking cigarettes and listening to an unfamiliar LP, a collection of disco hits. My sister had found the record in a pile of albums left out on a New York City sidewalk. She gave it to me because I was the only person she knew who still listened to vinyl. For the most part, the album was cute singles that failed to impress. Then came “Flashlight” by the band Parliament. I hadn't heard music like that before. Disco music always seemed like candy to me, something of little substance. But that line “Everybody's got a little light under the sun” hit me hard, and the bass in the song didn't obey the rules I had previously associated with dance music. The song seemed to demand a good time. I was awestruck.
I told Dave I thought more people should hear this song, and that's when my mind started spinning. I started talking about creating a new holiday devoted to funk. Dave egged me on. The holiday would be called “Funky New Year.” We would find more of this funk music, and we would celebrate the feeling it created by ringing in the new year every month. I told Dave that when the date and the month were of the same number, July 7th for example, that would signify the Funky New Year. This meant that the night before such a matching date would be Funky New Year's Eve. We would gather people, dance to funk music, we would count down at midnight, and then ring in the funk.
The idea stuck. Over the next year I started collecting albums: Parliament, Funkadelic, Ohio Players, Commodores, Funk Inc., and more. The music strengthened my resolve. When the next academic year rolled around, I was living on my own in a spacious place on the corner of Dayton and Francis. I held the first Funky New Year party on September 8th, 1997. It was a Monday night. It was a raging success. I emptied the living room of furniture, created a dance floor, installed lighting effects, set up the turntable, got a keg of good beer, and welcomed friends and friends of friends. I also wore a dress. During the course of that academic year I held nine Funky New Years. The party became an event, and people spoke highly of the spirit of the celebration. The party's success was largely due to the nature of those in attendance. I was fortunate enough to consort with some shady folks back then. These people brought the appropriate amount of danger and fun into my little apartment. By midnight the place was dark, smoky, drunk, and dancing. Together we struck a chord in each other and got close to the meaning of funk.
I was proud of the parties thrown that year, but I had trouble maintaining the tradition when I moved in with roommates the next year. The Funky New Year fell into disrepair.
This year my younger brother Myles announced his intention to resurrect the Funky New Year. I decided 7/7/7 was reason enough for me to travel back to Wisconsin and help Myles ring in an ultra-funky Funky New Year.
We succeeded in ways that went far beyond any of my expectations.
My folks were good enough to allow us to ring in 7/7/7 at their house, a place built for impressive parties. Those in attendance included several Funky New Year alumni, my brothers and sister, my father, neighbors, old friends, and a lot of new friends (my mom babysat for Courtney and Terry, bless her soul).
We had some live music early in the evening. This music was decidedly unfunky, and it had me a bit nervous. Around 9:30, however, we switched to a mix Myles put together, a special blend that was very much in tune with the funk. He and I started dancing, and after a time, out there in the vanilla suburbs, others got up and joined us.
Somewhere between 9:30 and 10, my brother Drew put on a dress, put his hair in pigtails, and joined us on the dance floor. To some this may sound extreme, but Drew's dress played a key role. People have to free their minds if the Funky New Year is to be successful. The man in a dress helps other people loosen up. And Drew managed to do that in spades. Plus, he was quite striking. 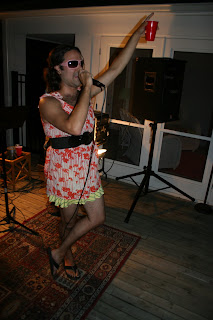 By eleven the dance floor was full, and things didn't let up. At midnight I pressed play on the traditional “Tear the Roof Off The Sucka,” and the most amazing thing happened. Everyone on the dance floor lit a sparkler, in the distance my cousin Brian set off fireworks, the funk rang out, and the crowd went nuts. All was on the one. It was one of those perfect moments that you cannot anticipate but always hope for. Spectacular in the truest meaning of the word.
For that, I want to thank Myles, Drew, Courtney, my folks, Dave Burck, George Clinton, and everyone who has ever attended a Funky New Year.
Stay funky.

Funky New Year. Forgot about those. Good times. Thanks for reminding me.

there is nothing - NOTHING! - like a party at the hayes house during summertime. this post definitely put a glide in my stride and a dip in my hip.

OK I'm telling you - Drew is gay - I've been saying this for years....my boyfriend is gay too. He says the problem with being gay is that girls won't have anything to do with you. I'm like, whatever.......

Long live the Funky New Year!!! I'm so happy to hear that you're carrying on the tradition when you can. :)