I don't have a lot of heroes.

I remember the writing prompt from elementary and middle schools:
Describe your hero.

Or later on in high school:
Write about one of your role models.

I remember struggling to write a response to these prompts. The concepts 'hero' and 'role model' seemed impossibly large. I suspected that no one I knew fit the bill. I always ended up writing about a person I respected, but I believed those responses fell short of the ideals I had about heroes and role models.

I was too young, too privileged, too comfortable in my middle class Midwestern world to know what heroes were for.

My dad introduced us to Lou Reed's Transformer, saying it was, in his mind, the best rock and roll album ever made. I listened to that cassette tape over and over. The music was what kept me coming back, but I have to admit, I didn't understand why it was a great album.

It wasn't until I found White Light/White Heat that I caught a glimpse of what made the Velvet Underground something extraordinary.

I was listening to "The Gift" for the first time. I was a teenager with an interest in girls and no concept of how to act on that interest. When I got to the end of the song, when the blade goes into Waldo's head, I felt the world crack open a little bit.

It would be years before I understood what that crack exposed, but it was an important moment for me. In that moment I started down the path that exposed so much of the world I believe in today: Sex is awesome, awful, ecstatic, selfless, and selfish. Drugs are great and devastating. Gender is confusing. People are messy. Our lives are made up by the words we invent.

Lou Reed was a guide on that path. He was one of the people who showed me the importance of dark humor, of an honest eye, of straight talk, of allowing people to be the kind of weird we are.

His music, words, and life demonstrated a kind of bravery and integrity that merits the word hero.
Posted by Hogan 1 comment:

Report on Conflicts of Interest in the Media Released

You want to hear about a shadowy force that impacts how we argue?

Take a look at this report from the Public Accountability Initiative.

The report describes how often news outlets brought in commentators on the Syria debate without disclosing clear conflicts of interests.

The report opens with this example.


During the public debate around the question of whether to attack Syria, Stephen Hadley, former national security adviser to George W. Bush, made a series of high-profile media appearances. Hadley argued strenuously for military intervention in appearances on CNN, MSNBC, Fox News, and Bloomberg TV, and authored a Washington Post op-ed headlined “To stop Iran, Obama must enforce red lines with Assad.”

In each case, Hadley’s audience was not informed that he serves as a director of Raytheon, the weapons manufacturer that makes the Tomahawk cruise missiles that were widely cited as a weapon of choice in a potential strike against Syria. Hadley earns $128,500 in annual cash compensation from the company and chairs its public affairs committee.

The report doesn't make for happy reading, but if we are to become more critical consumers of information, it is better to know what this kind of spin looks like.

And let's be clear here: this is not only happening on Fox News or on talk radio. The people noted in the report have appeared on PBS, the BBC, CNN; they have written op-eds for the Washington Post.

This is a clear sign to me that today's news consumers must assume the responsibility of critically engaging with information that comes their way - for example, investigating the intention and background of the people who present expert opinions.

I think many of us assumed that the journalism industry would do that work for us, but based on this report, they are not up to the task.

Do you think you are rhetorically savvy enough to find these kinds of flaws before they start to sway your views one way or the other?

Do you think the majority of people in the country are?

My take: This is clear evidence that educators need to shift our concept of literacy to include critical rhetoric.

Let me be clear, I am not one of those people who wants us to throw up our hands and say, "Oh, you can't believe anything anyone tells you anymore!" Those people have an old fashioned sense of the information landscape. They believe that the media was designed to feed them objectively true information - which has never been the case.

I want my students and my community to know that information is shaped and influenced by the people who deliver it to you. That doesn't make the information bad; it just adds a dimension that we have to consider.
Posted by Hogan No comments:

When Yelling at a Brick Wall Gets Personal This post from Nativeappropriations.com is simply fantastic, and because it is a rhetorical analysis and because it addresses the ways bias and blind spots impact arguments, I am happy to be able to post about it here.

In the post, Adrienne K. looks back at her 2011 post, Open Letter to the PocaHotties and Indian Warriors this Halloween. A post that made a lot of white people angry.

The 2011 letter opens with a salutation:


Dear Person that decided to dress up as an Indian for Halloween,

This year, the original author annotated that salutation with this:


I was going to write you an eloquent and well-reasoned post today about all the reasons why it’s not ok to dress up as a Native person for Halloween–talk about the history of “playing Indian” in our country, point to the dangers of stereotyping and placing of Native peoples as mythical, historical creatures, give you some articles to read, hope that I could change your mind by dazzling you with my wit and reason–but I can’t. I can’t, because I know you won’t listen, and I’m getting so tired of trying to get through to you. 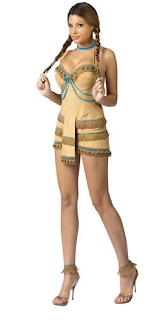 And that opening is what prompted me to write about this post on my blog. That frustration that Adrienne K.
is dealing with is too familiar: The knowledge that the person who you're trying to reach will resist in ways that defy reason and rhetoric. What's worse, Adrienne K. is dealing with that frustration while discussing a deeply personal issue - an issue tied to her identity and culture.

My interest in rhetoric and argument has always remained professional. I like to get fired up, but the privilege I inherited along with my race, gender, language, and birthplace makes it easy to keep my personal sphere out of the arguments I follow.


That’s 100% honest. The person that decided to dress up as an Indian probably isn’t going to listen to me. But those links actually *go* places. Places where you can read about why this is wrong. Where you can educate yourself. So if you read that paragraph and were like “oh crap, I don’t know any of this”–maybe now it’s time for you to click those. I’ll wait.

I'm not going to pretend I have some deeper insight on this post. It's a great piece of writing, and I hope you go check it out.

So, when I jump online with my coffee in the morning to read the news, a few blogs, and the last few minutes worth of social media, in the back of my mind, I'm always considering the question this blog attempts to address: How do we argue?

Three years ago, I wrote about my concern that the intentional spread of misinformation had the potential to taint what was already an unruly public discourse. Recently, a growing number of my posts have dealt with arguments based on misinformation seeping out of less rigorous parts of the blogosphere.

I'm starting to become more and more concerned about this.

It is no longer the occasional post by my crackpot friends (I know quite a few, and they are fun at parties).   People who I personally know to be smart and reasonable have used bad evidence to back up provocative statements about political debates.

The latest version of this was related to AmberAlert.gov, which went offline for days due to the shutdown. It turns out that the service itself was still running, but the website was offline - which was a bad visual, but not really bad news (Note: AmberAlert.com was not offline).

But here's where it gets ugly: The Blaze ran a story about how the Amber Alert website was down, and in the headline, The Blaze's Oliver Darcy noted that the website for Michele Obama's Let's Move Campaign was still up and running. Here's how Darcy wrote up that comparison in his story:

It was immediately unclear when the website was taken down. However, it should be noted that First Lady Michelle Obama’s website for her “Let’s Move” campaign is still up, running and fully functional.
The AMBER Alert program is a voluntary partnership between law-enforcement and broadcasters that issues urgent bulletins following cases of child abductions.


Darcy did not lie or twist facts in that section of text. Instead, he simply implied a lie. He suggested, by placing these two websites side-by-side, that Letsmove.gov is a federally funded program and that the maintenance of its website is performed by federal workers - supported by federal tax dollars.

The implication suggests that Michele Obama is running a federal program and that her programs get special treatment.

And that is how the "story" was presented to me when someone I know and respect posted about this on a social network. The suggestion was that the federal government values Michele Obama's project more than it values missing children.

Three years ago, I would have expected this from the fringe. But today I'm seeing it come from mainstream voters who are civically engaged.

It is a troubling trend.

I teach critical thinking, ethical debate, and rhetorical skills because I want my students to push back against this. I honestly don't care about their politics; I just want them to know how to argue their positions from an informed place.

I'll keep doing that work, but here's two questions for the interwebs: