We have to deal with some absurd stuff once in a while. It's often best to ignore that kind of stuff, but sometimes we have to deal.

Below is a video produced using hidden cameras and strategic editing to make it seem like a university in Florida is about to approve a student group that supports the Islamic State terrorist organization. Don't watch it unless you are uncertain about my credibility (they don't deserve the 'views').

I have so many problems with this video.

Now, I'll be honest, I approach this kind of video with some biases. I think the people who produce these videos are the worst kind of trash. These people are lower than those YouTubers who troll using homophobic slurs.

This is a video that creates a fake story out of real footage in order to make racist people think that college is a bad place to send children, and it's all an effort to fire up a base seeking to de-fund investment in public education and research.

The video is not intended to hold up to any kind of scrutiny. It doesn't need to, because the only people it's intended for already believe that colleges are terrorist mills staffed by socialists seeking to undermine an imagined version of America-the-Motherland.

And if you think I'm reading too much into this, look at Governor Walker's comments on how 'professors should just teach more classes,' or North Carolina's bill to require UNC professors to teach a larger course load (UNC, btw, is one of the top producers of viable research in the country). There are people attempting to ride into the halls of power by convincing voters that the education sector is a parasite that does nothing but detract from American greatness.

And I am tired of it. I'm tired of politicians suggesting they are more qualified to craft university policy, or that they are more qualified to decide what makes a professor valuable. I am tired of people suggesting that the existence of gender studies makes the entire enterprise of the university a waste of effort. I am tired of the suggestion that there is something unpatriotic about young people exploring different political viewpoints (Statistics show they don't vote, after all. It's the safest time for people to toy with their political identity).

And yes, I'm months away from becoming a professor (hooray), so I have a dog in this fight. But this should not even be a fight.

People know college is a good thing. People know that an education opens doors. People know that the research done at universities has a direct benefit on communities, the nation, and the world. Anyone who doubts that has only to do some very basic investigating.

This is a stupid argument, and I feel bad that I have to engage it as an argument. It makes me think of what I wrote yesterday, about how the nation's love of argument has sidelined the value of truth.

But I can't ignore this. Because this manufactured story is going to end up on talk radio, and the blogosphere, and even a few real news outlets.

So I encourage you to call it out. Call it stupid. Make sure that the creators and promoters of this video know that you hold them in the lowest esteem. It needs to be recognized that reasonable people think these video producers are not only liars, they are liars who lack skill and intelligence. We see what they are trying to do, and we are sick of it.

People are proud of their college degrees and the achievements of their local universities and alma maters (Go Badgers!), and these lame attempts to undermine that very justifiable pride should not stand.

In his column, Krugman pointed out that the law is performing very well.

He also pointed out that a lot of people don't know the law is doing well. Many believe the ACA is killing jobs (despite improving job numbers) and costing absurd amounts of money (despite the bill costing 20% less than had been predicted).

Krugman pointed to what he believes is the cause, something I've been writing about for a few years on this blog. It's something a lot of people have been talking about. He writes:


At a deeper level [...] we’re looking at [...] the impact of post-truth politics. We live in an era in which politicians and the supposed experts who serve them never feel obliged to acknowledge uncomfortable facts, in which no argument is ever dropped, no matter how overwhelming the evidence that it’s wrong.

I'm not here to suggest that one party is more guilty of this than the other. I think there is an interesting discussion to be had on that question, but I'll leave that to the more political blogs.

My concern is the relationship between "post-truth politics" and our cultural love of argument. The win-at-all costs approach that's emerged has an impact on public discourse, civic engagement, and the knowledge of argument young people bring into my classrooms.

I've been a booster for teaching argument. I teach deductive and inductive reasoning, the Toulmin Method, critical analysis of arguments, and I suggest my students all enroll in a course on sentential logic. I do all of that to encourage better practices when my student engage in arguments.


I began to question my ideas on argument last week, however, when I sat in on an interview with Kathleen Blake Yancey; the interview will appear in Writing on the Edge, and it promises to be a good one.

I have tremendous respect for the contributions Yancey has made to composition studies. So when she told us that she doesn't like to emphasize "argument" when she teaches, I leaned in to hear more.

Her ideas are going to be in the WOE interview, and I'd rather let her words do the talking. But I will say this: She got me thinking about our cultural emphasis on argument.

Why do we believe any issue that isn't easily resolved must become an argument? Why don't we contemplate such issues, or engage them, deliberate over them, consider them? The list of ways to approach an issue goes on.

But we prefer to argue. We prefer to draw a line, pick sides, and see who emerges a winner.

That approach to contentious issues has certainly contributed to the rise of "post-truth politics" Krugman describes. When an issue spurs competition instead of inquiry, people are going to look for a competitive edge. Like any competition, the higher the stakes, the more likely people are to play loose with the rules.

As I ready myself for a new phase in my career, I aim to chew on the questions this poses while developing new courses.

I wonder what you think would be a more constructive approach to issues.
Posted by Hogan 7 comments:

What are you doing here?

This is a little online space I've created so I have a destination to send people when I build a fake clickbait post.

Think about why you clicked on the post that led you here. It was an intentionally manipulative post, and you're better than that. Think before you click.

Feel free to use the link if you think of a good fake clickbait post: http://bit.ly/1CjpFrt

Oh, and while you're here, why not check out the rest of my blog. 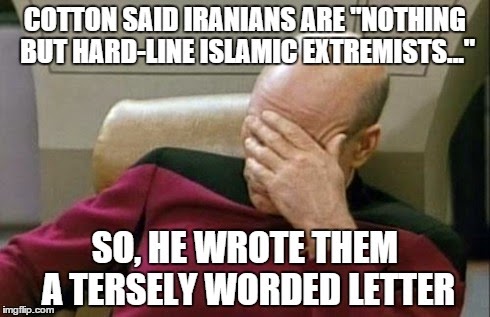 As someone interested in how debates take shape in the public discourse, this story has elevated stupid to the next level.

The amount of intellectual and ideological inconsistencies a person would have to hold in order to compose, revise, edit, share, and deliver the letter in question blows my mind.

Randal S. Olsen maintains a blog that looks at how to effectively visualize data, among other things.

One of his more recent posts looked at a visualization depicting how big pharma spends on marketing. He liked what he saw, but knew more information could be presented in an equally graceful way.

He came up with this (and others).

Like this example, his descriptions and reasoning are clear.

In a world where multi-modal rhetoric has become the norm, I think finding more writers like Olsen is bound to be helpful.
Posted by Hogan No comments: