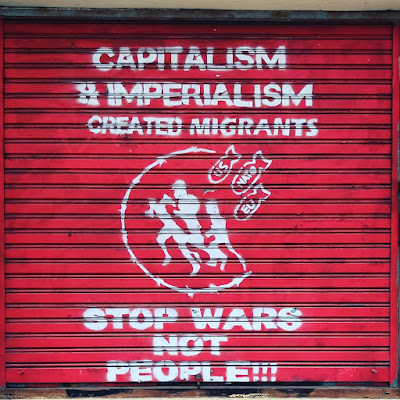 I shared this photo of a mural I found here in Pamplona a few days ago.

It expresses, with exceptional concision, a view I have been trying to articulate for years now.

I don't see it as necessarily anti-capitalist. I see it as a statement of fact.

Unchecked capitalism paired with imperialist governments led to the installation of unstable governments in the developing world that allow for the exploitation of resources. This has, in turn, led to failed states, wars, warlords, corruption, and eventually to a migrant crisis.

It was not an accident. It was the intent of powerful people to obtain resources from people with less power. And I benefit from it. The comfort I enjoy as a westerner in a developed economy comes, at least in part, from the exploitation of people I am unlikely to ever meet.

My comfort and the knowledge of its source make me uncomfortable. I see that as a good thing. I would like more people to experience that discomfort because discomfort moves people to act.

The problem is that people will resist any effort to disrupt their comfort.

For example, this morning I woke up to find this response to my photo in the comments:

That you would post that message....shows your astounding lack of understanding of history in any way, shape or context. Your done [Sic].

But I decided to write up a response anyway. The comment gave me an opportunity to put into words my thoughts about the current state of political discourse. Here's what I wrote:

It’s a perfect expression of the knee-jerk outrage that has defined the right since 2010. And your empty insistence that expressing a contrary political point of view somehow disqualifies me from the conversation… that was the cherry on top. Just the little reminder that #CancelCulture has its roots in 1980s conservativism (Heavy Metal, Hip Hop, Dungeons & Dragons, Harry Potter, etc. etc.)

I don’t envy you or other people trying to keep progressives at bay. You all had such a good run, and your comment harkens back to a time when conservatives actually had counterarguments. I remember how good William F. Buckley Jr. was at making progressive values look foolish. You had Friedman and Stigler – Nobel laureates. You had thought leaders who would have provided you with an actual example of history that countered the point made by the leftist mural I shared.

The thought leaders who could have helped, however, have all left: Brooks, Kristol, Noonan, Krauthammer. You’ve lost all your conservative thinkers. All you have left are rage-peddling click farmers paraphrasing what they skimmed in retired editions of history books while they dive down comment-thread rabbit holes on poorly moderated discussion boards.

If you wanted people to take you seriously, you would have something more specific than the word “history” to counter this mural’s claim that migrants in Europe are fleeing wars that are the result of thoughtless borders drawn by empires that have since retreated from the developing world. Or that migrants in the US are fleeing failing states that are descendants of puppet governments installed so Western interests could exploit resources without having to worry about regulations or, you know, the people who actually live in those nations.

You would cite historical events that counter that clear and well-supported telling of modern history if you had a leg to stand on. But instead, you shake your fist and insist that you know something you won’t share because… because what? I’m supposed to know it already? Is that how you would defend your absent argument?

Well, in the words of my generation: Whatever…

That's what I wrote, but to be clear: I'm not done. I'm just getting started.

Angel charls said...
This comment has been removed by a blog administrator.
9:52 AM


View My Stats
"Remember, no matter where you go, there you are." BB